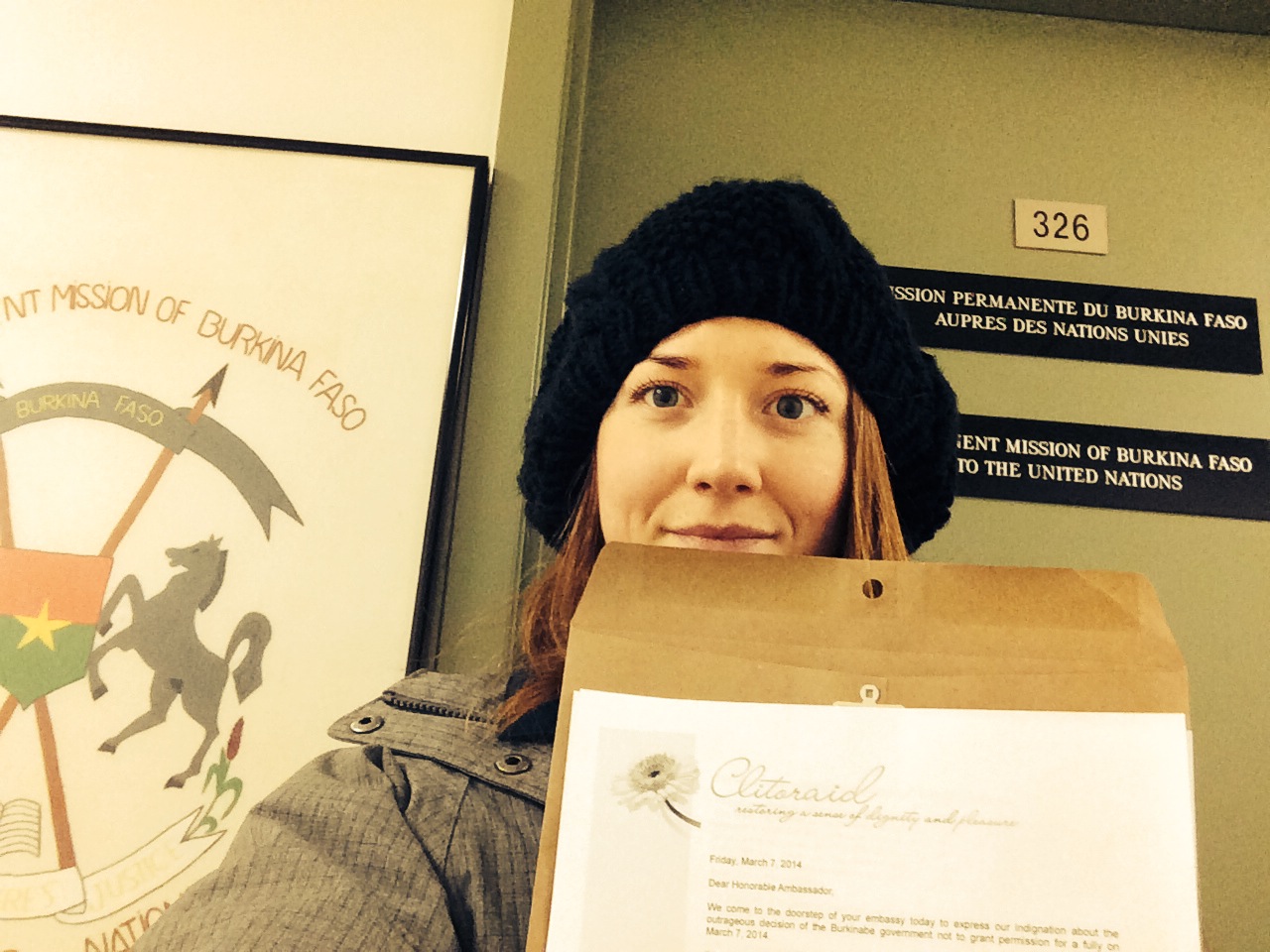 The following letter was delivered to Burkina Faso Embassies and Consulates around the world while legal actions have began against those who pressured the BF Government to take such discriminatory and inhumane measures. Hundreds of FGM victims plan demonstrations in Burkina Faso next week since the Health Minister proceeded to also revoke the temporarily licence of all four US volunteer doctors who had traveled to Burkina Faso to operate on the first 80 patients on our waiting list. Though our hospital was prevented from opening, they had already operated on 29 patients in a licensed clinic near by and planned on continuing their humanitarian mission next week.

We come to the doorstep of your embassy today to express our indignation about the outrageous decision of the Burkinabe government not to grant permission for a fully operational medical center dedicated to clitoral repair to open its doors in Bobo Dioulasso on March 7, 2014.

The main function of the humanitarian Kamkaso medical center, which is sponsored by the American NGO Clitoraid, is to provide clitoral restoration surgery for all genitally mutilated women who wish to have that procedure done at no cost.

The first application requesting permission for the creation and opening of the center was filed in 2011 and was then declared lost by the Burkinabe Health Ministry Service. Following the loss of the first dossier, the regional branch of the Health Ministry Service requested that AVFE resubmit a new application in February 2014; all the required documents were submitted and the dossier took its normal course and reached the office of the Health Minister. Representatives of the Health Ministry nevertheless assured representatives of the AVFE women’s association, Clitoraid’s partner in Burkina
Faso, that the setback caused by the loss of the file would in no way interfere with the hospital opening, and that it would be possible for us to launch operations there on March 7.

However, on February 27, Burkina Faso’s first lady, Chantal Compaore, cancelled her participation in the March 7 inauguration. On that same day, the Health Minister prohibited us from launching the scheduled opening and refused to tell us when the authorization would be granted. These events occurred just two days after an influential doctor who is a member of a powerful Catholic organization in Burkina Faso wrote an extremely defamatory letter where he announced that the Ministry of Health and the Governor had been beseeched in order to prevent the opening of the center, simply because of Clitoraid’s affiliation with the Raelian Movement.

We are convinced that the government of Burkina Faso does not want to join the list of countries practicing religious discrimination, and that it will want to resolve this situation quickly so that the hundreds of women who have registered to receive the free surgical repairs can benefit from that procedure as soon as possible. Our waiting list also includes 12 women from other African countries.

It goes without saying that Burkina Faso is a leader in the fight against the scourge of female genital mutilation, or FGM. (It is also known as excision). Therefore, to have a medical center dedicated to providing free surgical repairs for women currently suffering the consequences of FGM seems like a logical progression for the country.

Yet, today, after just such a hospital has already been built – thanks to donations from thousands of people of all faiths from around the world – it remains vacant, even though it is fully equipped and operational. It remains vacant because the person who came up with the idea of building this humanitarian medical center happens to be the spiritual leader of an internationally recognized philosophical movement, one that has thousands of members in Burkina Faso.

Our right to religious freedom is thus being disrespected and violated. Clitoraid’s volunteer doctors have had to begin the operations at a sister clinic in Bobo Dioulasso. Eighty women had already arrived in the city to have the surgery, and they were appalled to learn that the government had caved in to such pressure. Dozens of journalists were on-site witnesses, and the Clitoraid volunteers who show up in front of your embassy today will not relent until the discrimination they are experiencing is completely and unconditionally lifted and operations are allowed to begin at the world’s only medical center dedicated to FGM victims.

We hope the Burkinabe government will hear our plea through your services and that its discriminatory decision to disallow the hospital opening will be reversed quickly, so that there will be no need for us to appeal to an international court.

With my utmost respect,

President of Clitoraid
Spokesperson for the International Raelian Movement.